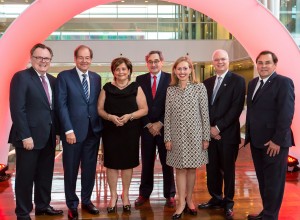 Montreal, May 14, 2015 – The Audacious benefit event delighted the roughly 425 people who gathered last night on the Parquet floor at the Caisse de dépôt et placement du Québec. Thanks to the participation of these audacious donors, over $800,000 was raised in support of the Institute for Research in Immunology and Cancer (IRIC) at the Université de Montréal.

Even though the mood at the event was jubilant and a good time was had by all, thanks to the hosting duties of Gregory Charles, no one failed to recognize the importance of the cause, which is to support the cutting-edge research at IRIC in the fight against cancer. “Despite all the efforts that have gone into fighting it,” the co-presidents stressed, “cancer remains the most important cause of death in Canada. The research being conducted at IRIC is not only promising, it is already proving its ability to generate exceptional results. The audacity that the institution has demonstrated, with the implementation of a high-performance model attuned to the clinical needs of the biopharmaceutical industry, deserves the sustained support of the entire community.”

The amounts raised will be turned over to the Audacious Fund, whose mandate is to invest in IRIC’s four major priorities, these being research, the training of the researchers of tomorrow, research projects with great potential for innovation, and the acquisition of state-of-the-art equipment.

“That Serge Godin and his family are here tonight, along with the donors who’ve contributed to backing IRIC’S development, is a reflection of the great generosity that Québec society is capable of,” added Michel Bouvier, chief executive officer of IRIC. “This support makes it possible for our institution to keep on growing, to attract top-caliber researchers from all over the world, to equip itself with essential equipment and to encourage promising young researchers. When all these elements are brought together, spectacular advances can be made, such as the recent discovery at IRIC of molecule UM171, which may transform leukemia treatment.”

IRIC extends its heartfelt thanks to all donors, with a special mention for the Audacious members of this evening’s fundraising committee as well as for our numerous principal partners, including the Caisse de dépôt et placement du Québec, CGI, Desjardins and Ivanhoé Cambridge. An immense thank-you as well to our channel partners, sponsors and volunteers, without whom holding such an event would be impossible.

About the Institute for Research in Immunology and Cancer

An ultra-modern research hub and training centre located in the heart of the Université de Montreal, the Institute for Research in Immunology and Cancer (IRIC) was created in 2003 to shed light on the mechanisms of cancer and discover new, more effective therapies to counter this disease. IRIC operates according to a model that is unique in Canada. Its innovative approach to research has already led to discoveries that will, over the coming years, have a significant impact on the fight against cancer. For more information: www.iric.ca