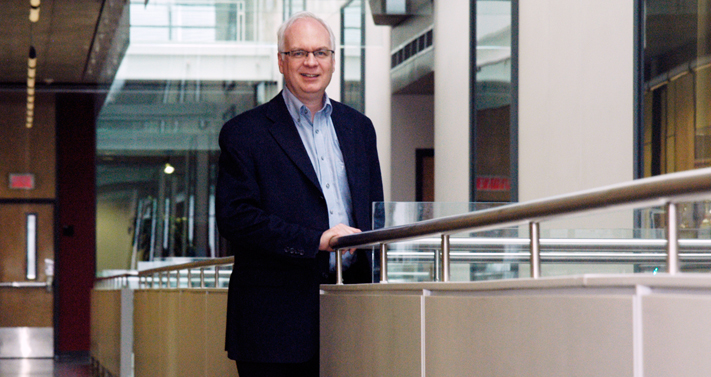 Professor Michel Bouvier is becoming the new chief executive officer of the Institute for Research in Immunology and Cancer at the Université de Montréal (IRIC), with a four-year mandate. The appointment was made by the executive committee of the University at its last session.

“IRIC is a jewel on our campus, one where re
searchers and students from around the world come together to fight cancer,” remarks Université de Montréal rector Guy Breton. “To lead this ground-breaking institute, we had to find a person who combines the vision of a top-level researcher, the rigor of an experienced manager and the enthusiasm of a veteran communicator. We found all those qualities and much more besides in Michel Bouvier, who can count fully on my support as he begins his mandate.”

Michel Bouvier is professor in the Department of Biochemistry and Molecular Medicine at the Université de Montréal Faculty of Medicine and chief executive officer of IRICoR, IRIC’s research commercialization organization. He succeeds Dr. Guy Sauvageau, who has directed IRIC since 2007. Dr. Sauvageau will continue his research at IRIC and his responsibilities as professor in the Department of Medicine.

“I thank Dr. Sauvageau for the remarkable work accomplished as head of IRIC,” adds rector Breton. “Under his leadership, IRIC has enjoyed exceptional development and earned itself a reputation for excellence in the Canadian and international scientific community.”

Professor Bouvier is a recognized expert in the field of cell signaling. With his team he has made a number of major breakthroughs with regard to G-protein coupled receptors (GPCR), and his work has led to the development of concepts and tools making possible the discovery of more effective drugs with fewer adverse effects. His name appears on the 2014 list of scientists most cited internationally, according to a ranking established by the information firm Thomson Reuters. In addition, Professor Bouvier holds a Canada Research Chair in Signal Transduction and Molecular Pharmacology.

Michel Bouvier has degrees in biochemistry and neurological sciences from the Université de Montréal. He did postdoctoral training at Duke University under the direction of Robert Lefkowitz, winner of the 2012 Nobel Prize for Chemistry.

About the Institute for Research in Immunology and Cancer
An ultra-modern research hub and training centre located in the heart of the Université de Montreal, the Institute for Research in Immunology and Cancer (IRIC) was created in 2003 to shed light on the mechanisms of cancer and discover new, more effective therapies to counter this disease. IRIC operates according to a model that is unique in Canada. Its innovative approach to research has already led to discoveries that will, over the coming years, have a significant impact on the fight against cancer. For more information: www.iric.ca